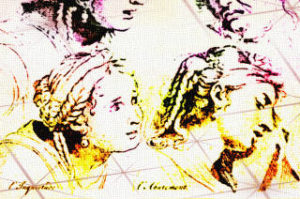 Other research groups involved in the project: GISI

The language of modern theories of emotions and passions originated during the late 16th, and the 17th and 18th centuries on the bases of humanist reception of the classical heritage, and of a remarkable theoretic effort applied to both technical and common vocabulary. It developed across different fields: philosophical thought, moral theology, devotional literature and pastoral treatises, above all. Implicitly it has been the greatest effort of self-representation ever produced by the European mind, as far as its constitutive emotional components are concerned. A better comprehension of the spiritual heritage and, so to say, a true anatomy of the European soul, spirit and mind, would be offered by a thorough and wider study of that language, insofar as it embodies the representation of its objects, as the birthplace of the emotional configuration of European culture.

There has been recently a great interest of research both theoretical and historical for Early Modern theories of emotions. Such studies, of a great interest in themselves, are mostly based on conceptual analysis, and disciplinary confined; moreover, they typically concern specific and narrow sets of known sources. The complex configurations and the varying associations that characterize that language in diacronic perspective, the interplay of different codes and disciplinary fields, and the geographical complexity and interchange that this phenomenon entailed, are often neglected.

A bigger scale of interdisciplinary research, on much wider corpora and with new instruments is possible. This is indeed an apt subject for the most recent techniques of Digital Humanities, from semantic analysis for search and representation of large interdisciplinary multi-linguistic corpora, to emotional sentiment analysis of textual feeds such as those used on Twitter or Facebook (but never applied to historical corpora).

Both the corpora and lexical resources have to be established. Google Books ngrams, fi, lack acceptable quality before the 19th century. A great work of networking of literary, scientific, philosophical, and religious existing textual corpora, and of new acquisition, is needed.

These are the main steps of the project:

Essentially the most innnovative aspects of the project are the scale of the analysis, the use of multi-disciplinary and multi-lingual corpora, the use of controlled vocabularies and of modern techniques of treatment, search and analysis. A better knowledge of the described unwitting process of self-representation would shed light by way of analogy, comparison, and inheritance, on the present emotional configuration that has such an important part in the present life of European societies, on the one hand; and on the permanence of this heritage in the public use of the language that expresses it nowadays, on the other hand. Emotional diversities among populations and cultures, and the nuanced social reactions based on patterns of emotions that have their roots in the historical development of the European mindset, can be targeted by a collaborative and multidisciplinary effort (linguists, neuroscientists, social scientists, political scientists), built on the basis provided by a historical enquiry, that both traces the ways in which this past (this language) has been put to use and is still operant in the public rhetorics of emotions, and that of this past makes a direct use in the comprehension of European societies for a more inclusive perspective.

Trans-disciplinary and multi-lingual aspects require the building of a multi-national research network of a size and complexity that requires at least the level of a European collaboration.

The initial network comprises researchers from Italy (university, CNR), France, Switzerland, Romania. A first version of the project has been presented in the 2015 Matchmaking Hera event in Tallinn, and in a seminar at the Institute for Research in the Humanities, University of Bucharest, January 2015.