DR2 at the Vienna station

The papers presented by DR2 members Eugenio Petrovich, Guido Bonino and Paolo Tripodi have been accepted at the ninth annual conference of the Society for the Study of the History of Analytic philosophy, to be held in Vienna on July 1-3, 2020. 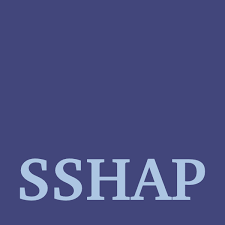 Below are the abstracts of the two contributions.

The authors would like to thank audiences at the 2006 meetings of the Western Canadian Philosophical Association and the Philosophy of Science Association, both in Vancouver, for their constructive feedback on earlier versions of this paper and related work, as well as the Social Sciences and Humanities Research Council of Canada for financial support. For important comments, the first author is grateful to John Basl, Malcolm Forster, Remy Petit, Alex Rueger, Larry Shapiro, Joel Velasco, and members of the DC History and Philosophy of Biology reading group. The second author would like to acknowledge the work of Allison Dawe as a research assistant in the middle 1990s, which first got him puzzled about the topic of the paper. Both authors thank Ingo Brigandt and Elliott Sober for written comments that have led to improvements. (2)

The acknowledgments contain information about the meetings in which previous versions of the paper were presented, the institutions that hosted them, and the funders who provided financial support. The most interesting information, however, concerns the persons who are acknowledged for having contributed somehow to the article, the so-called acknowledgees (3). By the analysis of the ties between the author(s) of the publications and the acknowledgees mentioned therein, we can reconstruct the complex social network underlying analytic publications (4, 5).

In this paper, I present the results of a large-scale study of the acknowledgments contained in 2073 articles published between 2005 and 2019 in five prestigious analytic philosophy journals (Philosophical Review, Journal of Philosophy, Mind, Noûs, Philosophy and Phenomenological Research). Mentioned institutions and persons were automatically extracted from the acknowledgments by a natural language processing technique called Named Entity Recognition (NER), and then manually cleaned to merge variants of the same name (e.g., “Tim Williamson” and “Timothy Williamson”).

Table 1. Top ten mentioned persons in the acknowledgments of the corpus.

The following map, produced with the software VOSviewer, shows the relationships between the acknowledgees with more than 10 mentions (n = 327). The dimension of the nodes is proportional to the mentions they receive, the distance between nodes is inversely proportional to the number of times two persons are co-mentioned in the same acknowledgment (the closer they are, the more frequently they are mentioned together), the lines’ width is a function of the number of co-mentions, and the color corresponds to the cluster attributed to the node by VOSviewer clustering algorithm. 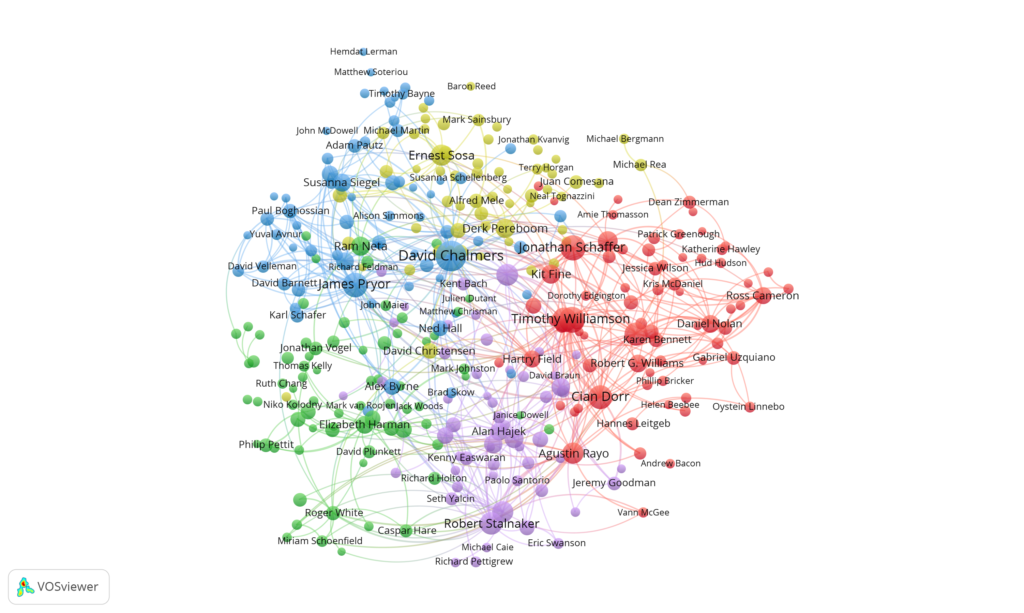 At the same time, the quantitative data raise some interpretative questions about the meaning of acknowledgment mentions. Are the acknowledgees mentioned because they provide a real intellectual contribution to the acknowledging publication, or are they mentioned for social reasons (e.g., curry favor, bragging, influencing the peer-review process)? This question is particularly relevant in the case of highly mentioned acknowledgees, which are mentioned in dozens of papers: is it realistic to assume that they really contributed to each of them?

Moreover, the significant discrepancy between the low rate of co-authorships in analytic philosophy (in our corpus, only 12% of the articles were co-authored) on the one hand, and the high rate of acknowledgees per publication (8.2 on average) on the other hand calls for an investigation of the practice of authorship in contemporary analytic philosophy: what kind of contribution is needed to be recognized as the formal author of an analytic publication? In times in which academics are increasingly assessed based on the number of publications they produce, the answer to such a question can be highly relevant to the design of proper research evaluation policies.

The legacy of Kripkenstein: a quantitative analysis

The aim of this paper is to understand the place of S. Kripke’s Wittgenstein on Rules and Private Language in the context of the “decline of Wittgenstein” in the analytic philosophy of the last decades (since the 1950s and 1960s Wittgenstein’s later views gradually lost their centrality). In addition to the traditional tools of the history of philosophy, the paper also applies quantitative methods. In part A, we characterize the decline of Wittgenstein in three different ways: A1) by measuring the decline itself with a citation-analysis technique; A2) by sketching the historical-philosophical context in which the decline took place; A3) by discussing the lack of success of Wittgensteinian PhD candidates in the US philosophical academia in the last decades. In parts B1, B2 and B3 we discuss how things changed after the publication of Kripke’s book in 1982.

A) The decline of Wittgenstein
A1) In five leading analytic journals (The Philosophical Review, Noûs, The Journal of Philosophy, Mind, and Philosophy and Phenomenological Research) the most frequently cited philosopher in the period 1986-2015 is D. Lewis, followed by Quine, Davidson, and others; Wittgenstein occupies the 63rd position (Buonomo and Petrovich 2018). A2) (i) After WWII UK became more peripheral with respect to the US; departments such as Princeton or Harvard gradually replaced Oxford and Cambridge. (ii) A “new rigourism” took possession of the humanities, which increasingly modelled themselves on the natural sciences (Schorske 1998); the rise of cognitive science – so alien from Wittgenstein’s hostility towards inner processes – was part of the same story. (iii) The style of mainstream analytic philosophy is very different from the style of the Investigations. (iv) In the 1970s there was a revival of metaphysics. (v) Metaphilosophically, methodological naturalism became prevalent: science and philosophy came to be regarded as continuous with one another.
A3) In the US, from 1981 to 2010, PhD candidates in philosophy who wrote their dissertation on Wittgenstein had a poorer academic career than those who wrote their dissertation on analytic philosophers such as Lewis, Dummett, Kripke or Fodor; the academic decline of Wittgenstein started in between the 1970s and the 1980s, as a consequence of a process guided by those academics who held the power of influencing the recruitment policies in philosophy departments (Bonino and Tripodi 2019).

B) The legacy of Kripkenstein
B1) In the above-mentioned five analytic journals from 1986 to 2015, Kripke is the 10th in the citation ranking, far behind Lewis (though arguably Kripke’s ideas are often used without reference). Moreover, it is likely that most of Kripke’s citations refer to Naming and Necessity.
But let’s move now to some more fine-grained data. Consider, in the same dataset, the 2,354 articles in which Wittgenstein’s Investigations are cited. Among them, the following co-citation map shows the articles with more than 20 citations.

On the basis of co-citations among the documents, the software makes some patterns emerge, in the form of coloured clusters. Clusters in themselves have no meaning, but interpreters can recognise the green cluster as so-called Wittgenstein studies, the red one as analytic philosophy in general, the yellow one as concerned with anti- foundationalism and relativism, and the blue one as the rule-following debate. 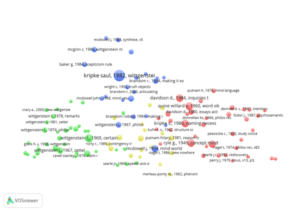 Kripkenstein, which belongs to the last cluster, is the biggest item of the entire map (= it is the work which is most frequently cited together with the Investigations).

B2) (i) Kripkenstein brought Wittgenstein back at the centre of the empire: Princeton, US. (ii) Kripke’s contributions to modal logic fully belong to the new rigourism in the humanities. (iii) Kripke has a straightforwardly analytic style. (iv) He fostered the revival of metaphysics. (v) However, in his work there is room for a science- philosophy divide, above all because Kripkenstein argued that the normative cannot be ultimately reduced to factual terms.

According to Williamson, the success of Kripkenstein can be explained by the fact that its defence of Wittgenstein avoided verificationism; however, Kripke’s solution of the sceptical paradox was unclear and unattractive, if compared to that offered by Lewis in 1983 by means of a strongly metaphysical distinction between objectively natural and objectively non-natural properties: “It was something like Lewis’s solution, not Kripke’s, that was widely accepted” (Williamson 2014). Is that true? Co- citation analysis suggests it isn’t. The following map represents the works cited together with Kripke’s book on Wittgenstein in the Web of Science in the period 1986- 2015. Lewis’s article seems to be marginal (it has only 17 citations; many other works are cited much more frequently). 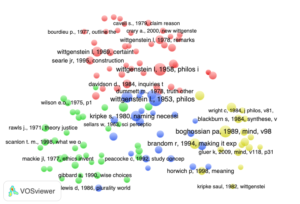 B3. From 1981 to 2010 in the US only 22 out of 329 Wittgensteinian PhD dissertations in philosophy were devoted to Kripkenstein: the 6.6% of the corpus, a result which prima facie is difficult to accommodate with the widespread sentiment of its strong

impact in the recent history of philosophy. Looking closer at the data, however, a possible explanation emerges: 15 out of the 22 Kripkensteinian dissertations were defended in high-ranked universities such as Princeton, Harvard, Columbia, and so forth: e.g. P. Boghossian’s 1987 thesis. All this seems to suggest that in the considered period analytic philosophy has not been prevailing, i.e., approved by the majority of philosophers in the US; rather, it has been hegemonic, in Gramsci’s sense of possessing a form of cultural supremacy, which is produced by a socially or institutionally powerful group.

Williamson, T. (2014). How Did We Get Here from There? The Transformation of Analytic Philosophy. Belgrade Philosophical Annual, 27, 7–37.