Here is the cover: 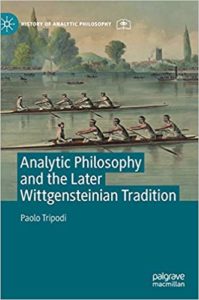 And here the back cover:

This book expertly traces the early reception of Wittgenstein in the United States, the shift in the humanities to a tradition rooted in the natural sciences, and the economic crisis of the mid-1970s, to reveal the factors that contributed to the eventual hostility towards the later Wittgensteinian tradition.

The book uses both traditional methods of the history of philosophy, such as conceptual and contextual analysis, and quantitative methods: for example, chapter 3 (“Carnapstein in America”) and chapter 5 (“Science, Philosophy, and the Mind”) provide and interpret data concerning the presence and role of Wittgenstein in the full-text of The Journal of Philosophy and The Philosophical Review from 1921 to 1970; chapter 7 (“Concluding Remarks. The Last Decades”) briefly discusses the results of Bonino and Tripodi’s just published article on “Academic Success in America: Analytic Philosophy and the Decline of Wittgenstein”, and it also presents and analyses some data included in the Web of Science citation indexes by applying co-citation tools (in particular, within the sub-corpus of the articles in which Wittgenstein’s Philosophical Investigations are cited, co-citation analysis indicates the number of times in which other works are cited together with the Investigations during the period 1986–2015); chapter 2 (“The Core and the Periphery”) briefly discusses Franco Moretti‘s application of Wallerstein’s core-periphery model to literary history, and it also reflects on its possible applications to the history of philosophy.